Two of the four tubes of the NFT system and now running fine. Purely for the sake of my own sanity I decided to switch off the top two tubes for the time being and divert the water to a DWC system.
The good news is that the two troughs I bought were cheap. £4.50 each The colour? Oh well you can’t have everything. Cut appropriate size holes in the ends and the plumbing was quickly completed using 22 mm push fit waste pipe. I cut four gaskets out of a plastic milk bottle for each side of the two bulkhead fittings.
Two small sheets of polystyrene from B&Q were less than £6. Enough for two maybe three more troughs. 50mm for the net pots and 25mm for on growing of seeds germinated in rock wool. They both float on the water surface. Small cut out for the bulkhead fitting. Air is the next consideration. Approximately one air stone per meter is recommended. I have an existing solar powered air pump supplying two stones. I simply moved this from the FT to the DWC. This will only produce air when the sun shines. Not perfect but I think a fair compromise. Not seen in the photo but the water drops down into a 225 Lt  barrel underneath creating additional oxygenation.
So far so good. I may need to fit some sort of plastic cloche to cover them.
Planning on this only running during the summer but we will see.

In the rear of the photo you may see some of the anti slug methods I am using. Copper tape and wire and small quantities of Ferric Phosphate. I still do the late evening run with a torch but the numbers of slugs I am removing are dramatically reduced. 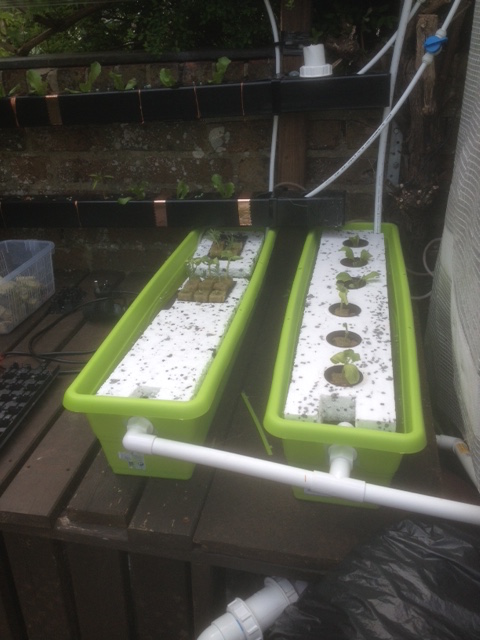